A California trip for an entire week: Los Angeles

I’m sadly writing the last stop of my California trip: Los Angeles. As usual, we left Las Vegas at night and we took a 6 hours Flixbus ride to go to L.A. The ticket fare should be around $10. In LA we spent three nights and four days as the city is really big and there were more things to see. We decided to stay in Venice Beach at the hostel Samesun Venice Beach as its location is terrific and the prices were quite good.

While I was there, the so famous Californian weather wasn’t by my side. The first two days were sunny, but the last two the forecast predicted rain… great, right? Anyway, let’s talk a bit about the city of angels. The city is really big and to go from one side to another it can take a 2 hours bus ride. You can use the Tap Card to move around or simply cash and coins to pay the ticket fare on the bus.

So, as soon as I arrived I took a shower, drank a gallon of coffee and I was ready to explore the city of my dreams. Again, don’t be scared by the number of homeless. Unfortunately, these big cities have a number of homeless people that we European are not used to see. This matter made me appreciate the city less than expected. I think that in movies they are great to make you see the best parts of this country, whereas they actually have too many problems. Nonetheless, it remains something unforgettable.

First thing first I had to see was the famous Walk of Fame in Hollywood. Even in this case I was expecting a lot, and I felt a bit disappointed when I saw Hollywood Boulevard. But it was nice to walk over the “stars” of Hollywood and recognize so many names! From there you can easily see the Hollywood Sign. Plus, you can see the famous Teatro El Capitan, The TCL Chinese Theatre and The Dolby Theatre. 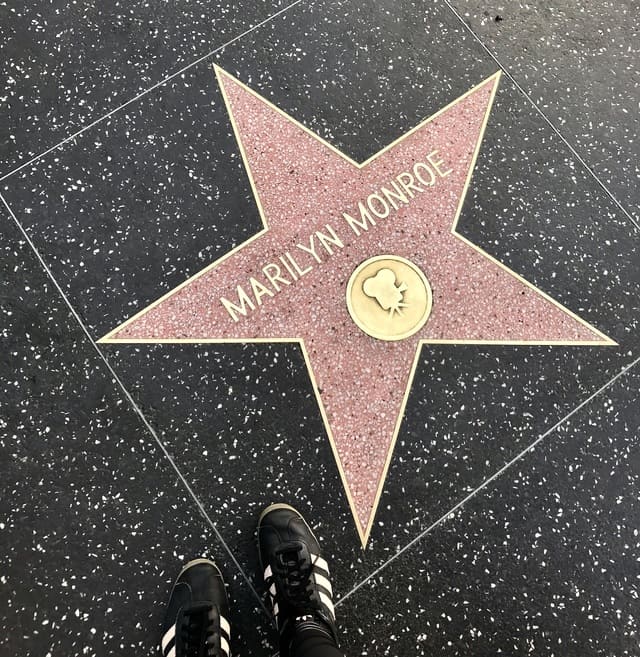 From there I moved towards Melrose Avenue and Melrose Place in West Hollywood. This street is a shopping, dining and entertainment destination where you can also find the famous graffiti wings by Colette Miller. While walking my friend and I needed a coffee stop and we entered a really cute place called Stir Crazy Coffee House; if you like the free refill that’s for you! Then, if you keep walking you will encounter another famous Instagram spot: The Pink Wall by Paul Smith after that you will be near Melrose Place and Glossier, a make-up brand that has super scented lipstick and a terrific design in their stores. For the afternoon my friend and I moved to Santa Monica Pier, an amusement park and many places where to eat or to enjoy the sound of the ocean. We had our early dinner at Bubba Gump Shrimp not a really healthy option, but I must admit it wasn’t that bad. From Santa Monica, you can easily walk to Venice Beach in 20 minutes. Don’t always use Uber, you have legs! 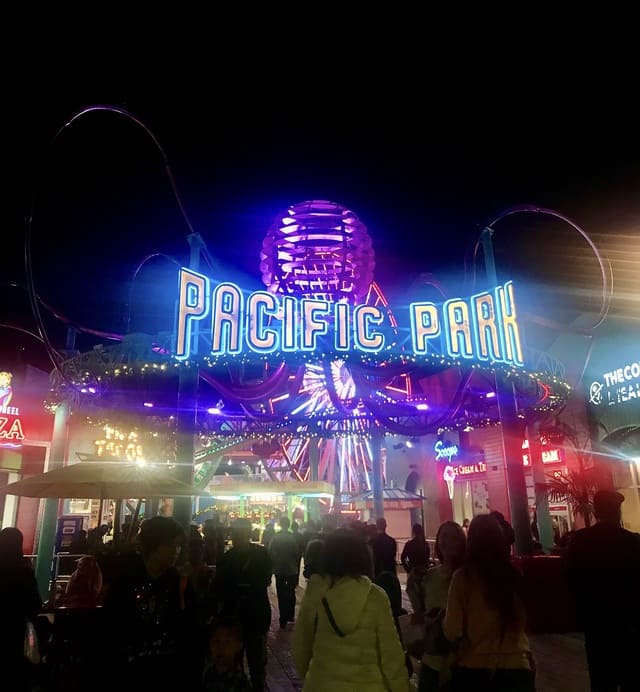 The next we had our car rented, so we woke up early and we went down to the airport to pick up our ride. Having a car in L.A. it’s unfortunately the best decision you can take. In that way you can easily go everywhere and in a shorter time. So, first of all, we drove through Hollywood and we arrived at the feet of the Griffith Observatory Park. This place was my dream since I was a teenager and I saw “Rebel Without a Cause” with James Dean. While walking up to the Observatory I also met a friend: a coyote. Not encouraging at all! The Griffith Observatory has a close view of the Hollywood Sign, the admission is free and you can see the beautiful skyline of the city. 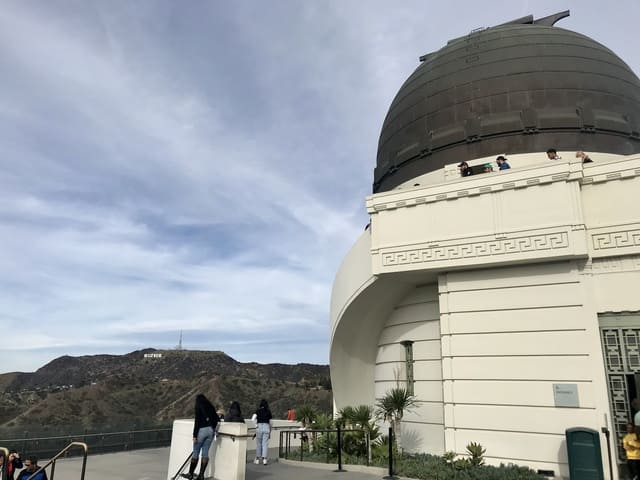 After a bit of sightseeing and some pictures, we went back to our car and we drove to Beverly Hills neighborhood. I didn’t see anyone famous but we surely saw huge houses and I kept wondering who was living there. Later we decided to go to Malibu. We drove to the famous Pacific Highway – it is considered one of the must-do things to do, and I must say they are right. The view on the ocean is breath-taking. It takes around 30 minutes to reach the Pier.

When arrived in Malibu I was really disappointed. There’s nothing there, if not the Pier, the street and the hills with hugs villas. It seemed nothing special, except for the beach, it appeared nothing as what you see on movies. More than taking a walk down the pier there was nothing much to do. So we drove back to Los Angeles and we decided to visit Marina del Rey and the Venice Canals.

The Venice Canal Historic District is a district in the Venice section of Los Angeles. The district is noteworthy for its man-made canals built in 1905 to reproduce Venice. The residential district surrounding the remaining canals was listed on the National Register of Historic Places in 1982. However, in recent years, there has been extensive renovation work on many of the old houses, and many large, modern houses have been built and the area it’s now one of the most beautiful I saw in the whole city! 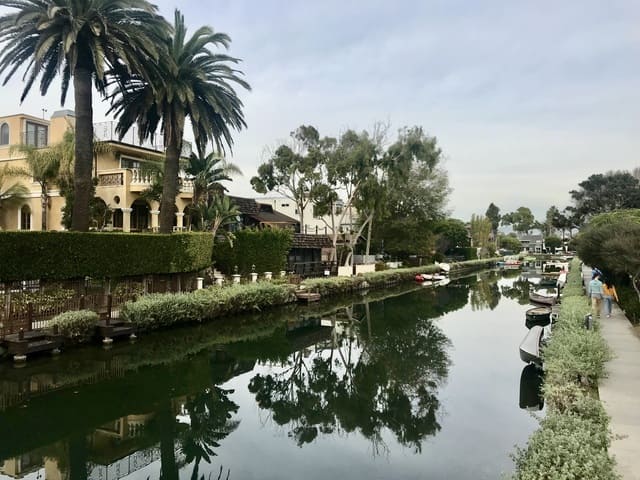 During the last two days the weather wasn’t really great but we had just a few things to do luckily. A must-see museum you have to visit is The Getty Center. The J. Paul Getty Museum, commonly referred to as the Getty, is an art museum housed on two campuses: the Getty Center and Getty Villa. The primary museum, located at the Getty Center, is in the Brentwood neighborhood of Los Angeles, on a hilltop. The Museum houses primarily European paintings, drawings, sculpture, illuminated manuscripts, and decorative arts, as well as photography from its beginnings to the present, gathered internationally. The secondary museum, the Getty Villa, is in the Malibu neighborhood and displays art from Ancient Greece, Rome, and Etruria. 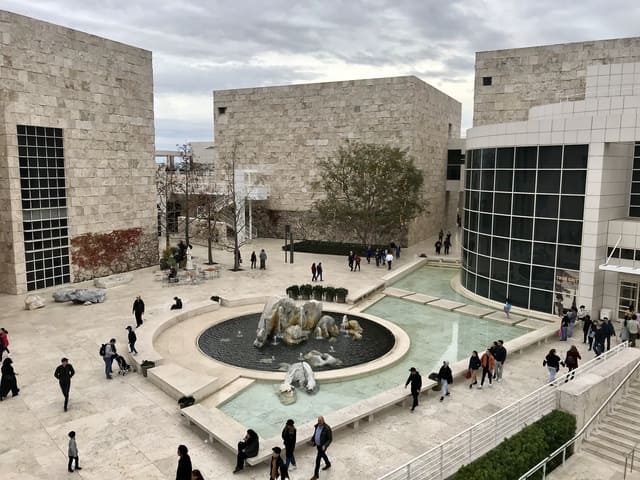 The first one is where I went and here comes a funny story about it. To go there my friend and I took the bus, but the directions were wrong and we got off on the back of the museum. We entered and the security guy stopped us and starting to ask questions and check on our documents. We said we were there because of Google Maps and he explained to us that to go there you have to take a specific shuttle that drives through the bushes of the hill. We were really sorry and about to leave when he called another security guy and they drove us up to the museum with a private bus. After that, we were constantly checked by any security guy. DON’T TRUST GOOGLE MAPS GUYS!! Even though this funny and scaring experience the museum was incredibly beautiful and breathtaking, both the view and the structure. One of my favorite thing in the city.

Then we moved back to the city, where we visited the LACMA installation Urban Light which is really popular on Instagram. Urban Light is a large-scale assemblage sculpture by Chris Burden located at the Wilshire Boulevard entrance to the Los Angeles County Museum of Art. The 2008 installation consists of restored street lamps from the 1920s and 1930s. Most of them once lit the streets of Southern California. Afterward, we took a walk on the famous Rodeo Drive. The name is most commonly used metonymically to refer to the three-block stretch of the street north of Wilshire Boulevard and south of Little Santa Monica Boulevard, which is known for its luxury goods stores. Days were passing by so fast. The last thing we did before leaving the US was a bike ride along Venice Beach to enjoy the last rays of sun before going back to the cold European weather. 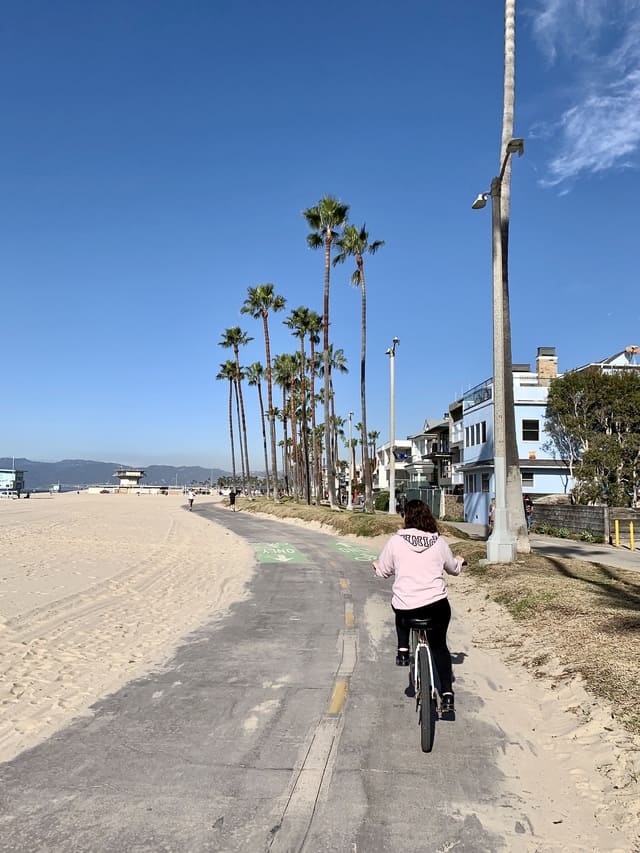 A California trip for a week: Las Vegas

A weekend in Madrid: what...

A short weekend at Mont...

Day trips you can enjoy...