For Thanksgiving break me and some of my international friends have decided to explore the States with a real U.S.A road trip! Thanksgiving Day is a national American holiday celebrated on the fourth Thursday of November. It’s tradition to spend time with your family waiting for the stuffed gigantic turkey with mashed potatoes and cranberry sauce. For us it was a normal day that’s why we chose to leave for this road trip towards the south of the States. If you ever wanna travel on Thanksgiving day just remember that many attractions might be closed and the hours of shops and restaurants might change. 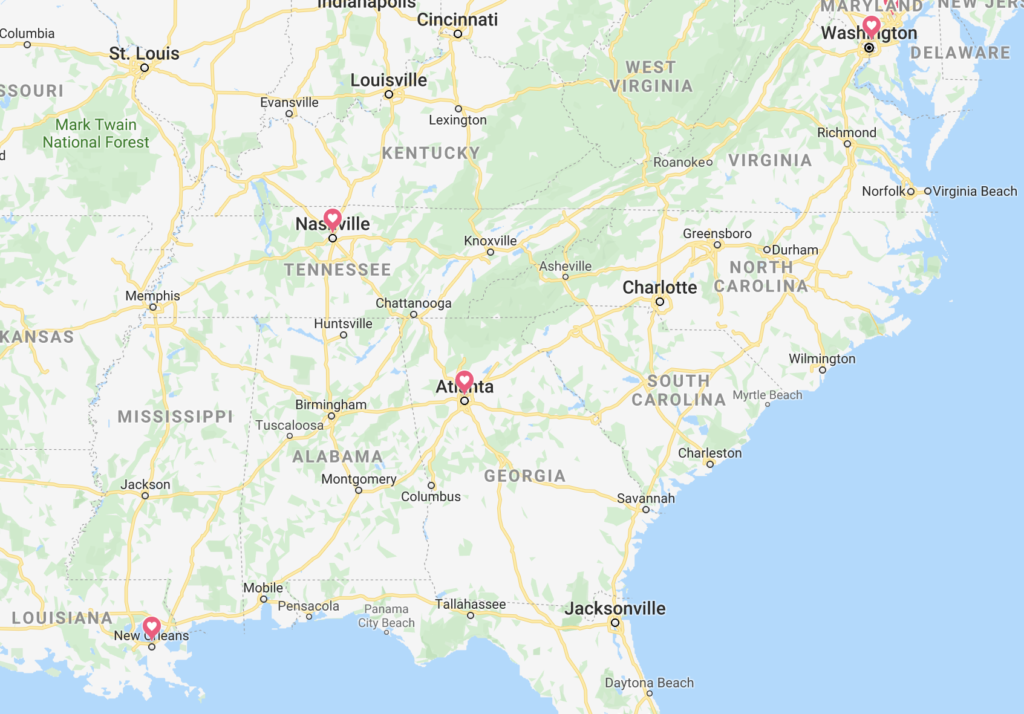 Atlanta is the capital of Georgia. The city is famous because during the 1950s and 1960s, it became a major organizing center of the civil rights movement, with Dr. Martin Luther King Jr., Ralph David Abernathy, and many other locals playing major roles in the movement’s leadership.

Before arriving in Atlanta you can do a quick stop in Charlotte, North Carolina, especially in this wonderful diner called Midnight Diner. Once in Atlanta, we stayed at a motel called Travelodge by Wyndham College Park that I don’t recommend for sure, or just in case you really wanna spend few money. The city is not big and you can stroll around in just one day. You can visit the Aquarium, the World of Coca-Cola and the Martin Luther King National Historic Site. The latter is very well maintained and arranged, so you have the possibility to get to know MLK’s story deeper. 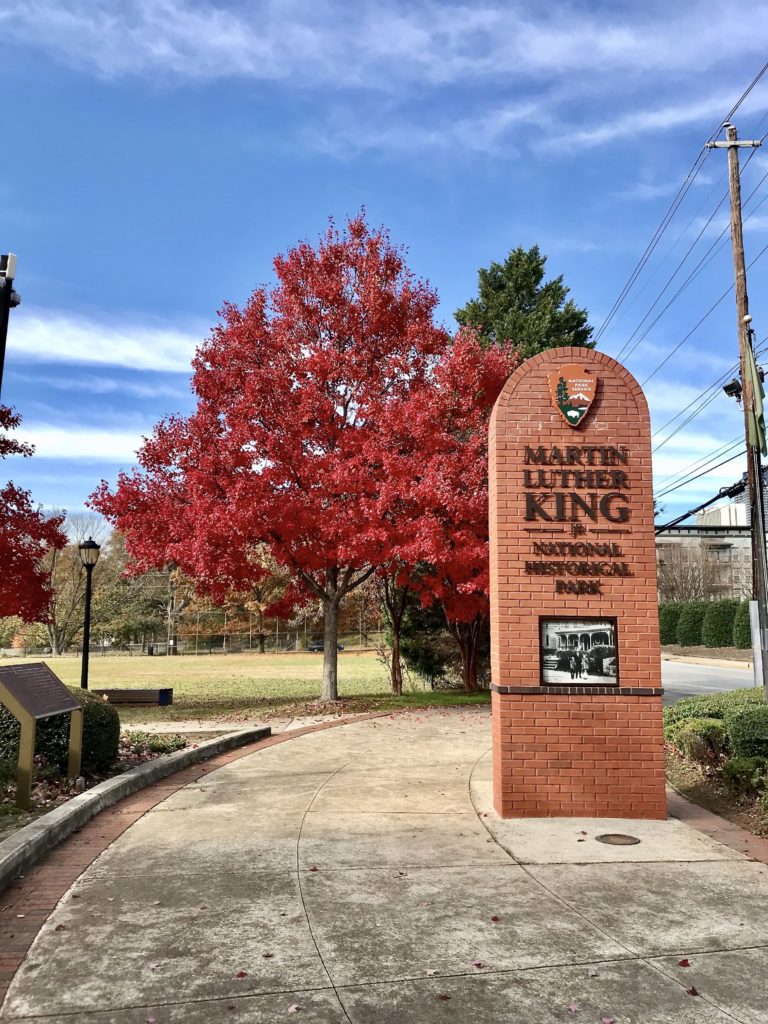 We spent two nights in Atlanta and the first day we arrived we went to the Stone Mountain Park. You can have a hike and enjoy the beautiful views and nature all around you. Most important you can admire the great rock relief with three Confederate figures, Jefferson Davis, Robert E. Lee and Stonewall Jackson. The second day we visited the city center, in particular, the Centennial Olympic Park with its beautiful Christmas markets with a German soul and the Ponce City Market, which is a half-closed and half open-air market and shopping center. 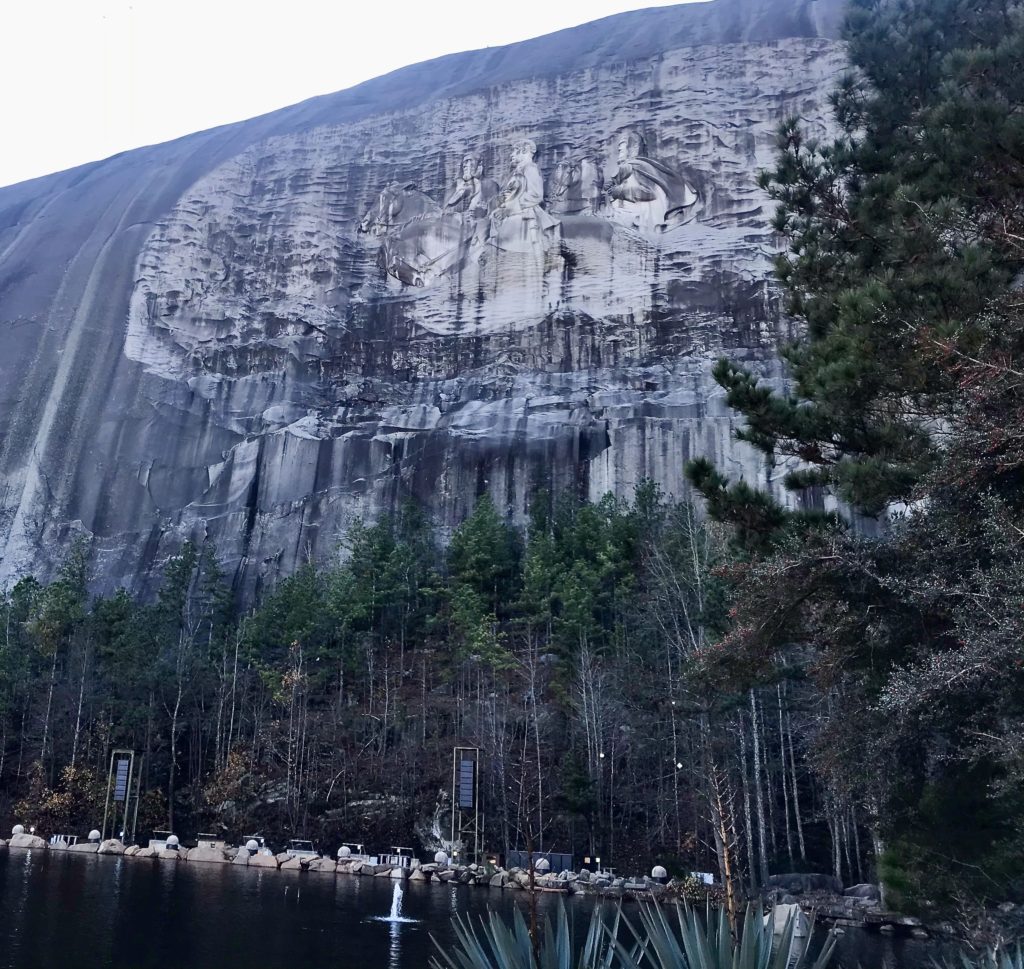 New Orleans is a city along the Mississippi River in Louisiana founded in 1718 by French colonists. The city is known is for its distinct music, Creole cuisine and its annual celebrations and festivals, most notably Mardi Gras. The historic heart of the city is the French Quarter, known for its vibrant nightlife along Bourbon Street. The city has been described as the “most unique” in the United States, owing in large part to its cross-cultural and multilingual heritage.

From Atlanta to New Orleans it takes about 7 hours, again we stayed there for two nights and this time the hotel was the Days Inn by Wyndham New Orleans Pontchartrain, not great from the outside but the rooms are ok. The first day we directly went to try the famous beignets at Café du Monde that for us Italians are more like “frittelle” than beignets! Anyway they were really nice. After that, trying to work off at least 1/4 of their calories we started visiting the city from Lafayette Square and the amazing St. Patrick’s Church right in front of it. Later, we took a walk along the Mississippi River, where you can do a cruise on the old boats used by the French for the slave trade. 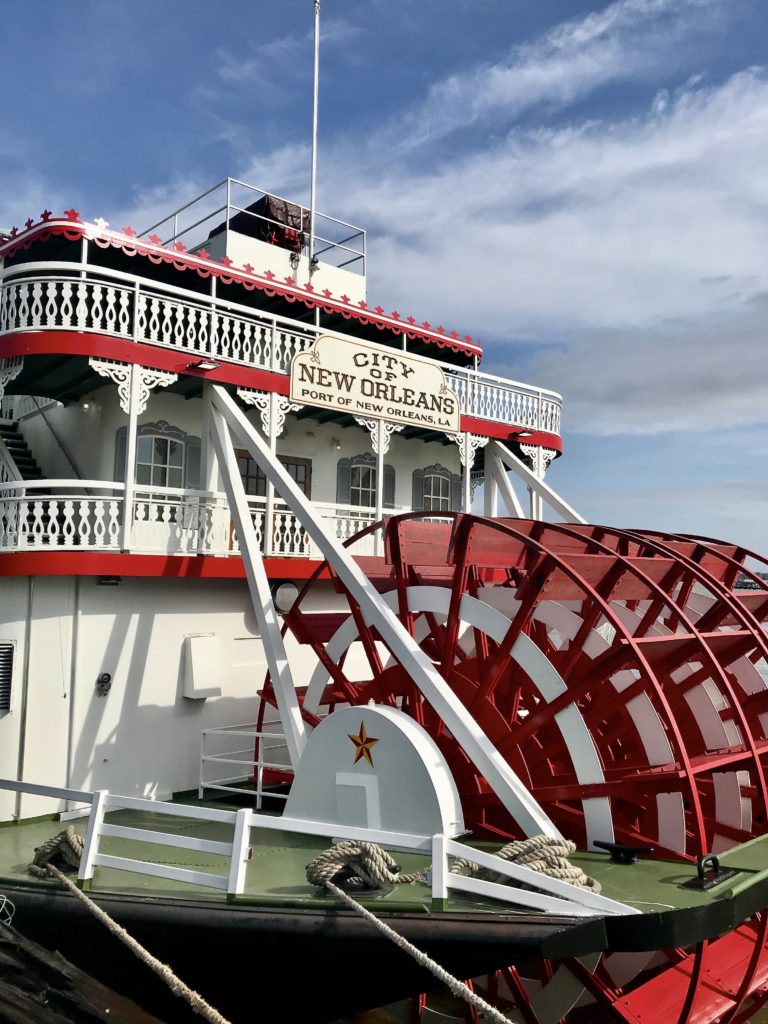 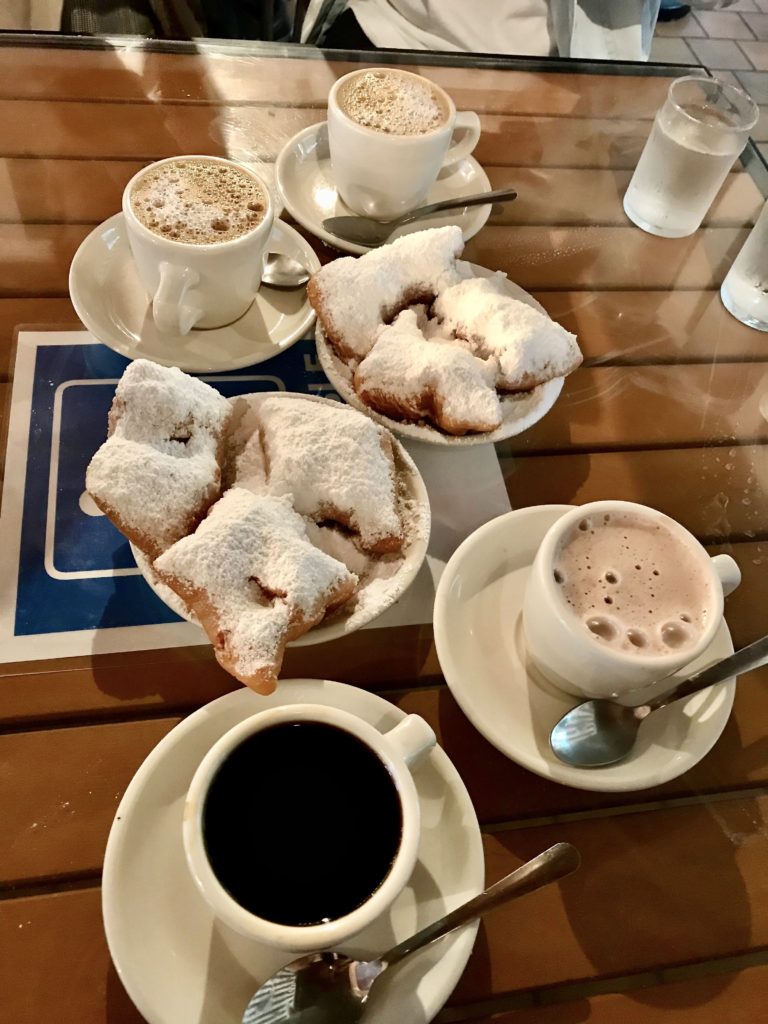 If you keep walking along the river you can reach the District Garden a neighborhood of the city originally developed between 1832 and 1900 and is considered one of the best-preserved collections of historic mansions in the Southern United States. Keep walking with your eyes in every house you’ll pass. They are dreaming houses that makes you travel back in time. Walking around the district seems to be right in the 19th century with horse and carriages on the streets. In the district, you can also visit the famous Lafayette Cemetery No. 1, a historic cemetery founded in 1833 and still in use today. The city’s first planned cemetery, it is notable for the architectural significance of its tombs and mausoleums, often containing multiple family members. Keep in mind for visiting it you need a tour (mandatory!) and at least 20$!

After this walk, we decided to walk back via Canal Street to the French Quarter and Bourbon Street, a historic street famous for its many bars and strip clubs. The French Quarter, also known as the Vieux Carré, is the oldest neighborhood in the city and it’s crazy funny. If you take a walk during the day and then at night it will completely change! The only thing it won’t are drunk people! In any case be safe, especially if you are traveling alone! If you wanna end the day with a good meal and live music you can go to Bamboula’s, I really recommend it to you! 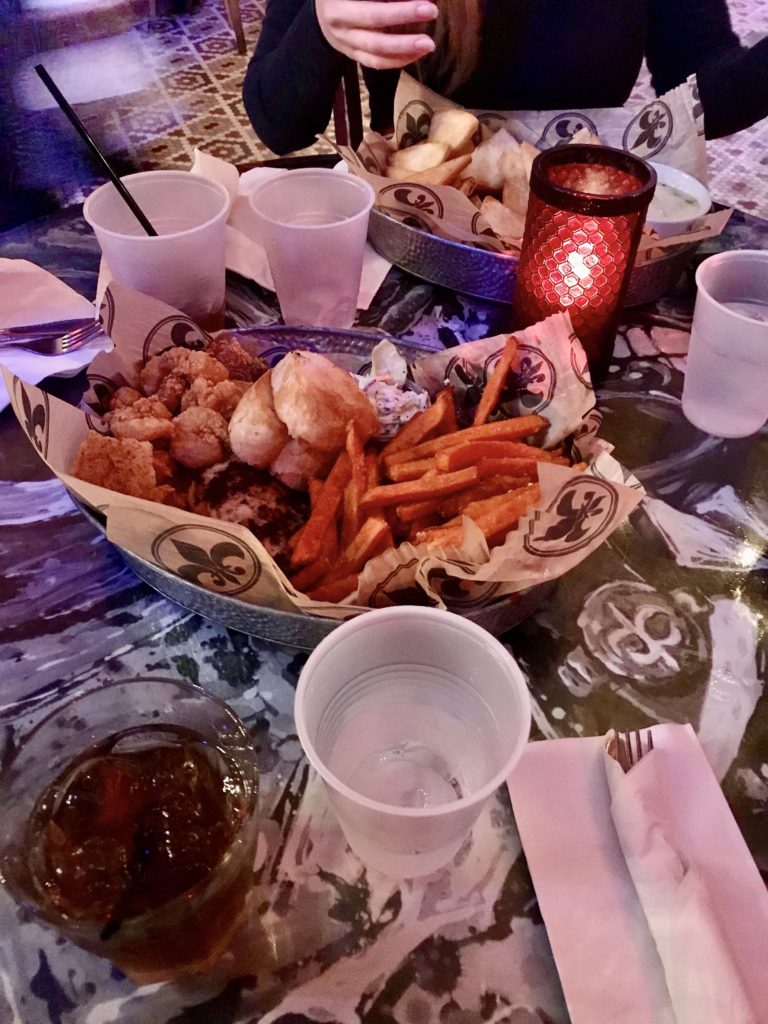 From New Orleans to Nashville it takes 8 hours, so make yourself comfy! Nashville is the capital of Tennessee, homeland of country music and whiskey. The city was named for Francis Nash, a general of the Continental Army during the American Revolutionary War who founded in 1779. We stopped in the city for three nights at Quality Inn Nashville Downtown – Stadium which I don’t recommend after the crazy issues we had practically each night.

Nashville isn’t a big city but if you love country music this is the place for you! You can visit the famous and historic Ernest Tubb’s shop in Broadway Street, which is also the busiest street during the night where you can have fun with live music in each bar. You can walk to the Music City Walk of Fame Park where you’ll find the Johnny Cash Museum & Cafe, the Nashville Symphony | Schermerhorn Symphony Center and the Country Music Hall of Fame Museum. 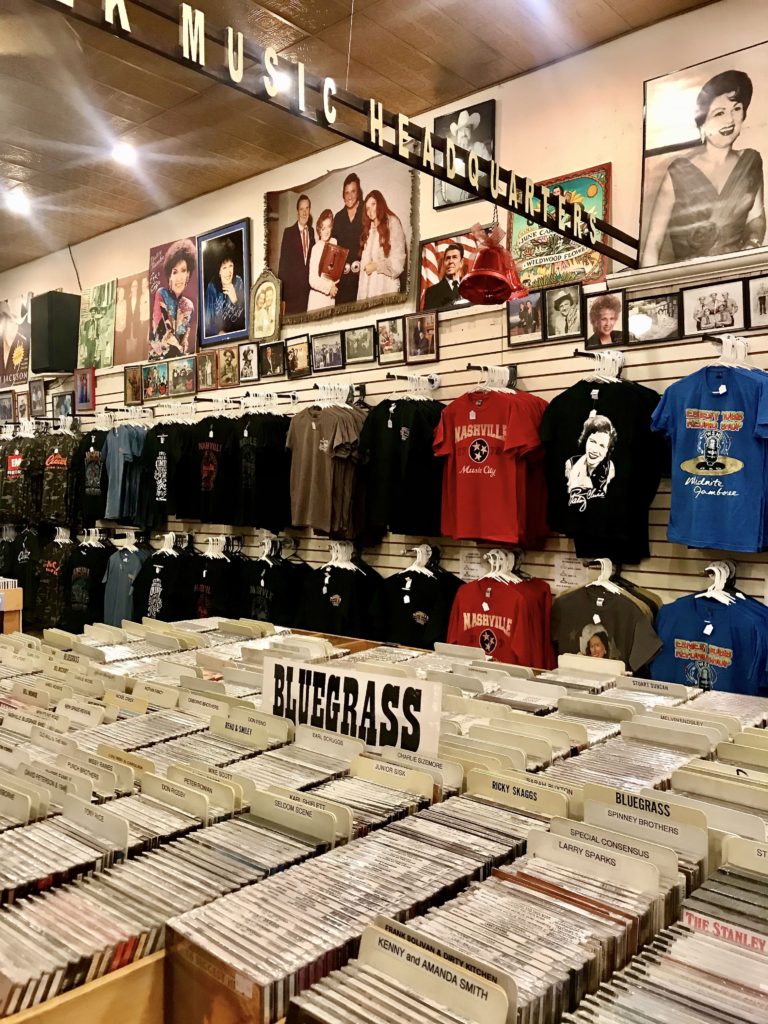 If you wanna reach the other side of the side walk through 2nd Avenue North so you can stop at Mattheessen’s and eat a freshly baked giant chocolate chip cookie and take a look to the old (1940’s) Printer’s Alley that first was the house of publishers but now hosts bars. When you’ll reach the other side you can visit the Bicentennial Capitol Mall State Park with the Tennessee State Capitol. 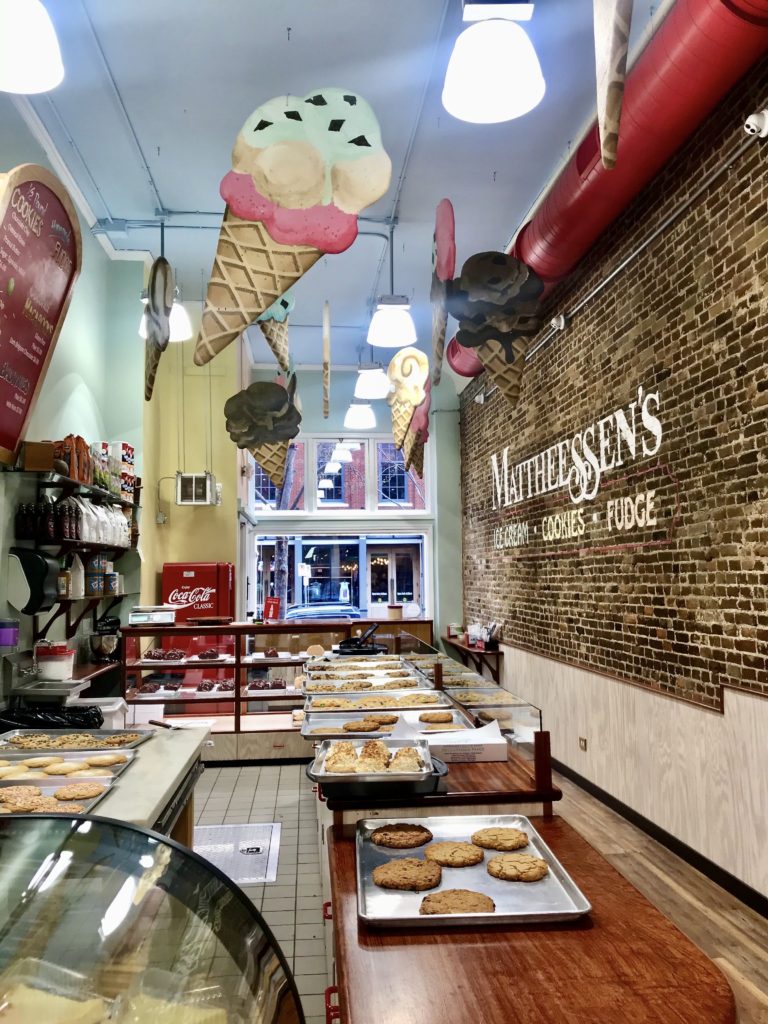 A bit outside downtown Nashville you can visit the Parthenon in Centennial Park. It is a full-scale replica of the original Parthenon in Athens and it is now an art museum. If you prefer some shopping you can visit the giant Gaylord Opryland Resort & Convention Center where you enter a magic world of gardens, fountains, waterfalls and shops. Finally I can suggest you three nice places where you can eat something and, again, have some fun with live music: Dick’s, Wildhorse Saloon and Luke’s 32 Bridge.

Why brands should create an adaptive clothing line?

A California trip for an entire week: San Francisco