How Louis XIV invented fashion as we know it

We already know now that fashion moved with power. When Louis XIV went to the throne the fashion capital of the world wasn’t Paris, but Madrid. The Spanish style was tight, rigid and black. But we know that the Sun King was all about the opposite: luxury was Louis’s New Deal, making France the world’s leader in taste and technology (of that time!). His finance minister, Jean-Baptiste Colbert, even said that “fashion was to France what the mines of Peru were to Spain”—in other words, extremely lucrative. Louis’s reign saw an increase of employment in the clothing and textile trades and nothing that could be made in France was allowed to be imported.

Louis XIV transformed Versailles into a showplace for the best of French culture and industry: not just fashion but art, music, theater, landscape gardening, and cuisine. France soon became the dominant political and economic power in Europe, and French fashion began to eclipse Spanish fashion from Italy to the Netherlands. French was the new black.

The king himself was the ultimate arbiter of style. The fashions he introduced were colorful, voluminous, and ornamental, the antithesis of austere Spanish style. With his distinctive mane of curls and signature high, red-heeled shoes, Louis combined his authority with his charisma. 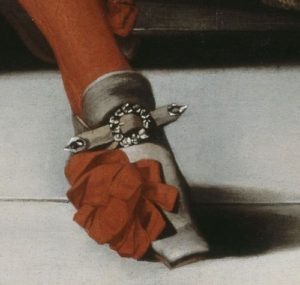 One of the most effective and far-reaching innovations was to mandate that new textiles appeared seasonally, twice a year, encouraging people to buy more of them, on a predictable schedule. Fashion prints were often labeled hiver or été for winter or summer. At that time the summer fashion season began  on Pentecost (the seventh Sunday after Easter), with winter clothes abandoned on November 1, All Saint’s Day.

Not only was the fashion industry enriched by the constant updating of wardrobes, but the French tended to get bored if a trend lasted too long. As the economist Jacques de Savary observed in his 1675 treatise Le Parfait Negociant, “the French are naturally changeable”; fashion as we know it today is a reflection of the national character, conveniently aligned with the king’s economic goals. In the highly specialized haute couture industry, artificial flowers, embroidery, tapestries, buttons, and even fans continue to be handmade using the traditional skills and techniques passed down from the 17th century.

What Does ‘Couture’ Mean Today?