The Evolution of High Heels

Some weeks ago we had to do a project work in my Fashion MKT class. Two of my classmates opted for this interesting topic: the evolution of high heels. I was very interested in discovering how they were worn and considered in ancient times.

So the first high heels go back to Ancient Egypt, around 3000 B.C., when the wealthy and the royalty would wear small like wedges for ceremonial purposes only. In Ancient Greece & Rome, around 200 B.C., they were mostly used for theater purposes because it helped distinguish the élite characters for their storylines.

The real origin of high heels is Persia though. And drum rolls…they were for MEN! Oh yes! They were used by men for horse riding. In this case, the purpose was utilitarian; the question is “How it became a fashion item?” It’s always a matter of power. The Persian Empire started to conquer Europe and as a consequence people started to look at their rules not only on lifestyle but also in fashion. That’s why the Persian style started to spread, and with it, the usage of high heels.

Century after century, the power shifted from country to country until it came to France. Under Louis XIV heels were an expression of status and no one could wear red heels higher than him. During this time the high heels used by women were tall platforms known as “chopines” – originated in Venice – in order to make their dresses look longer which was a status symbol. In France, these kind of heels immediately became outlawed because heavily linked to prostitution! 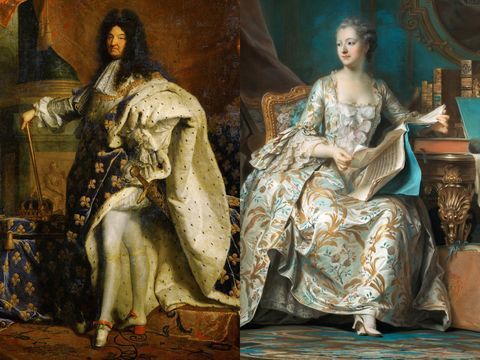 The first recorded high heel being worn by a woman was by Catherine de Medici in the 16th century, but was Queen Elizabeth I the one of the earliest women to wear heels but was never really popularized until much later.

Napoleon banished the Louis Heels to help spread equality which took place during the French Revolution, but it was during the Age of Enlightenment that the conception about high heels for men really changed. As a matter of fact, men stopped wearing both extravagant clothing and shoes (no more high heels!).

Then the high heels came back during the Victorian Era, when three main heels took after Queen Victoria: the boot, the clog and the dress slipper. During this era, heels evolved becoming more comfortable and curved and associated with sex appeal and femininity. That is when men stopped associating themselves with heels!

So this is the basic evolution of high heels throughout history! Nice, right?

The History of Pink by Valerie Steele

Is pink a trend now? Let’s see how