Home Blog Why you dress the way you do?
Blog

Why you dress the way you do?

Why you dress the way you do? That’s a serious question, and the “Mean Girls” cover picture I used is quite explicit of what I am going to write about. Do you know James Laver? He was an English author and an important pioneer in fashion history. In a Vogue article entitled  “Fashion: A Detective Story”, he wrote “Nothing is more revealing of an age than its hypocrisies and perhaps analyzing them can help us to understand how fashion works.” As usual, as soon as I read the sentence my brain started to think of all the connections to our age. What duplicity can you detect from nowadays style?

It’s not an easy and fair question, as it obliges you to make a judgement not only about the others and on the epoch you live in, but also about yourself, because willing or not we don’t just dress to wear something. As a matter of fact, in his article Laver highlights three principles: the Hierarchal, where you usually dress for a class affiliation, the Seduction where you obviously dress to attract the opposite sex, and the Utility, where you just dress for warmth, for example. These principles are simply guides, as the reasons can be uncountable and sometimes not distinguishable too.

I found the whole explanation really interesting- I suggest you to read it –  and if I have to start, I must do it wondering how I usually dress according to these assumptions, because honestly speaking, we ALWAYS dress thinking about something. I challenge any of you to just dress, with no wondering at all about the colors you are choosing or where you have to go. I mean, will you go to your graduation ceremony the way you go to the supermarket at 11pm when you’re looking for a midnight snack? No, at all.

For example, for my graduation I was so in love with a Self-Portrait dress that I bought it almost one year before the ceremony, without even knowing when it would have been. I’m telling you this because, yes we think, a lot or may be not so much, about how to dress no matter the occasion. 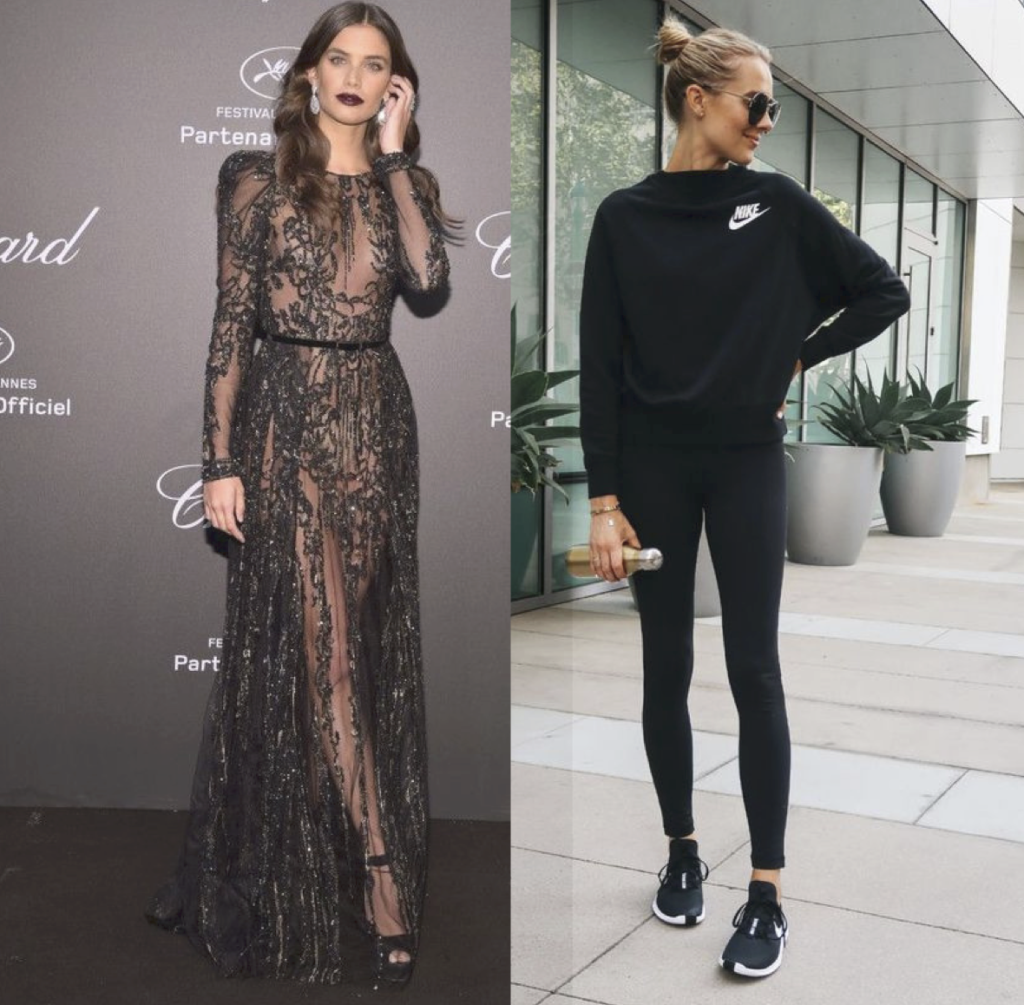 Which one would you choose for a Red Carpet? No doubt the one on the left.

If you pick the one on the right you’re probably crazy. That’s what’s all about. Society has imposed this dress code for such and similar events. The upper classes, before with the sumptuary laws – laws that banned lower classes to dress in a certain way -, and then with their powerful self-reference have always been the style guides of all time. They were the people to look at, what am I saying… they actually are. We still, at least I do, look at powerful and high status people to understand what’s the trend of the moment or the near future.

And, in my opinion, here it comes the biggest hypocrisy of our times. People, thanks to social media, criticize with harsh the persuasive influence rich people have on style, arguing that everyone should be free to wear and buy anything they like without feeling left out or démodé. Firstly, because not everyone can afford to buy only branded clothes, and secondly because their style it’s not for an everyday worker. “Why should I wear it just because X has it? No way I’m going to look weird as X looks.”

However, at the end, these same people don’t just do it. Why? Reasons differ from person to person and are impossible to detect, in the first place because few people are really sincere with themselves.

In nowadays society people is stuck between a rock and a hard place. We feel the need to get rid of fashion dogma, but at the same time we need to feel part of something, and so we wear what we think people similar to us would wear. We need to feel part of a group, represented by someone else and not just by ourselves. It’s a hypocrisy yes, but it’s the human nature and we can fight it as much as we want, but it’s hard to win a battle like this.

The point is that I agree with what Laver affirms, and I can’t say the contrary because his description is accurate. It’s in the human nature to reflect in what we do, with our gestures and behaviors what we think and how we feel and as a consequence, that to me seems natural, we express our feelings and our nature also with the way we dress. Does the suit makes the man or not?

A day trip to Baltimore! Discover it with me!